In Wear Wore Worn, Seohee Kim and Hansol Kim propose a new approach to clothes, framing ‘clothing’ as the object of the act of ‘wearing.’ The two artists distance clothing from being a consumer good—setting it apart from the fashion industry—and attempt to rediscover its authentic meaning by exploring the concept of ‘wearing’ through ceaseless artistic experimentation and practice.

Throughout their artistic practice, the two artists have been committed to sharing diverse cultural values that can be expressed through clothing, while individually exploring the concept of ‘wearing’ within universal yet unconventional boundaries that transcend potential cultural differences. The title of the exhibition, Wear Wore Worn, stems from the process of wearing a piece of clothing, which in a way resembles an act of transformation. ‘Wearing,’ reinterpreted and translated through the passage of time, social and cultural backgrounds, behaviors, attitudes, and personal preferences, is genuinely activated upon the interference of personal perception and creativity.

Hansol Kim integrates the concept of hierarchy visualized by fashion culture, behaviors induced by individual items, with relevant linguistic symbols. As a result, Kim breaks down and rearranges the traditional status and definition of clothes, attempting to expand the scope of what they refer to. At the hands of Kim, ‘fashion’ is analyzed into different categories: ‘fashion’ as a method of distinguishing one from another; ‘fashion’ as the representation of one’s behavior and thought process; and ‘fashion’ as the different stages of transformation of clothes. These three categories are placed in relevance with each other, in order to establish a new system within fashion. Speaking against the words of the French anthropologist André Varagnac, who once stated that “Any vestimentary system is either regional or international, but is never national”, Kim develops a personal vocabulary that transcends physical and regional boundaries, yet does not adhere to international perspectives.

Flags created with tie-dye techniques challenge the idea of medieval culture, which is widely assumed to have been rigid and uncompromising. Referring to the patterns and symbols of aristocratic families—which were considered as visual representations of collective egoism and jealousy for others—and separating them from their chronological context, Kim deconstructs their distinctiveness, décor, and symbolism. The tie-dye method, which on itself implies various ways of ‘wearing,’ is deliberately utilized to bring upon the accidental encounter of different regional and national symbols, giving the flags new decorative features.

When clothing becomes object, furniture and space (2021) and When strap becomes watch, belt and scarf (2021) both suggest the potential for the conceptual idea of ‘clothing’ to expand, by highlighting the actions taken to wear a watch, a belt, and a scarf, and by comparing how words that refer to how to wear these items, hold similarities. Kim used each item to question the limitations of ‘wearing,’ while looking into the various terms that address this action; this resulted in the artist’s personal conclusion that words such as ‘put on,’ ‘wear,’ ‘tie,’ ‘wrap,’ ‘twist,’ ‘put on,’ ‘buckle up,’ ‘tighten,’ and ‘fasten’ could all be used in exchange, in order to express the meaning of ‘wearing.’ Kim’s exploration and insight has further been visualized through a range of illustrations, forming a three-dimensional structure which cannot be defined as or summarized into a single item.

Kim’s research is put into action through the ‘behavioral strap,’ which is a strap that can be worn in different styles and methods. Within this strap, words that address the act of ‘wearing’ are metaphorically expressed and juxtaposed in the form of buckles that refer to watch straps and belts made of different materials. Making use of rattan, herringbone, and steel strap patterns, and blending the flags and symbols of Korea (where the artist was born) and the Netherlands (where the artist currently resides in), Kim establishes an entirely new visual hierarchy that stands firmly against the existing fashion system.

‘Clothes’ generally exist as objects of the act of ‘wearing,’ made to express and deliver the complex history and motivations behind the wearer—the subject. What happens when the object becomes the subject? How will the form of clothes and the concept of wearing change, if ‘clothes’ were to wear the ‘wearer’?

Seohee Kim meticulously tracks the impact of clothes witnessed in social relationships, exploring the act of ‘wearing’ by physically combining and integrating fragments of clothing that reflect the forms of the human body. Originally inspired by the Latin saying, “Vestis virum facit”, translated to “Clothes makes the man” in English, Kim wittily imagines the consequences of elevating ‘clothes’ as to being the subject of the act of ‘wearing.’

When worn, ‘clothes’ demonstrate two contrasting ideas at the same time. Acting as a method of ‘hiding’ and ‘showing’ simultaneously, clothing becomes a crucial and strategic factor in building any social relationship. Imagining a world where the roles of the subject (the ‘wearer’) and the object (the ‘clothing’) are reversed, Kim simplifies the concept of ‘clothing’ to its essence—as the decision-making process of what to ‘show’ and ‘hide,’ and the constant dilemma between the tendency to conform and the urge to express one’s uniqueness. Kim’s project is executed on the premise that the ways humans wear clothes and clothes wear humans, hold many more similarities than one would expect. Imagine a person wearing a jacket on top of a shirt. From an inverted perspective, clothes could become the subject that ‘wears’ multi-layers of wearers, which would be the object.

Meanwhile, the fitting room remains as an interesting concept it is a space designed for the act of ‘wearing.’ This isolated space—solely dedicated to ‘wearing’—adds a sense of holiness to the act. The dressing room (2021) inspired by the fitting room is a visualization of a virtual space—possibly inside a fitting room or as one itself—where clothes can wear a human being. Only those who are selectively ‘worn’ by the clothes or the room would be allowed to enter this space. Inside The dressing room (2021), visitors can discover a part of The skirt (2021), which is another work that explores the act of ‘wearing.’

The public is repeatedly exposed and accustomed to certain type or style of clothing that is desired by the market. Clothes that are mass-produced only upon a guaranteed level of demand through a set manufacturing process, inevitably cause the act of ‘wearing’ to become passive, leading the ‘wearer’ to accept this way of wearing as the social norm. Since the social agreement is almost always prioritized over individual expression in the process of communication, the ‘wearer’ naturally accepts the fact that this balance remains the same, even within the boundaries of non-verbal communication that uses clothes. Kim focuses on the characteristics of clothes as a method of non-verbal communication, deliberately analyzing the idea of ‘sociability’ defined by consumerism. The artist’s exploration provides visitors with the opportunity to voluntarily use their creativity in order to view clothing through an alternative framework.

The ‘fragments of clothing that reflect the forms of the human body’ and individual parts such as sleeves, collars, zippers, and pockets, which have all been utilized in Kim’s practice, imply the widely accepted perception of ‘wearing’ in society, while simultaneously allowing visitors to experience clothes based on individual experiences and memories. In the process of wearing these different parts—which are laid out in unfamiliar structures—visitors are encouraged to choose between sociability and creativity, the passive and the active, and the object and the subject. Upon establishing a more independent idea on the act of ‘wearing,’ visitors can finally understand the alternative approach to fashion. This approach, activated on a personal level by every visitor, is recorded in the forms of various silhouettes which reveal the awkwardness of ‘wearing something as it is’ and demonstrate the attempts to break free from existing social expectations. Kim’s practice provides the ‘wearer’ with a tool that ignites creativity and inspires the ‘wearer’ to create a refreshing silhouette that ultimately expands the scope of fashion.

Born in Seoul, Korea, Hansol Kim currently lives and works in Eindhoven, the Netherlands. Kim received his BA in Design and Craft from the University of Brighton, and further completed the graduate program at

Design Academy Eindhoven. Based on his continued fascination for and interest in clothing, Kim explores the different roles and formal potentials of clothes—his main method of working—from social, political, and cultural perspectives. He expands and recreates his own body and identity, while bringing materials and forms previously limited to virtual reality into the analogue world, creating work that acts as an intersection between various practices. Circling around this context, Kim’s work presents unique formal qualities, allowing it to be juxtaposed with other clothing, furniture, and spaces. By showcasing characteristics that are more often discovered in these other forms of art, Kim’s work actively explores the possibilities of being categorized into a completely new form of art altogether.

Seohee Kim explores the idea of personal expression through the perception of clothing, the ways of revealing the body, and the act of wearing. Kim incorporates unconventional clothing made of secondhand fabric and knitwear created with dead-stock yarn, further looking into the idea of clothing itself through unexpected combinations of different materials. Dedicated to creating garments focused on introducing new possibilities and perceptions of clothing, Kim voluntarily questions and explores the ideas of ‘dressing’ and ‘undressing’ within a personal context. Kim received her BFA in Fashion Design from the London College of Fashion, and further completed her MA in Fashion Design from the Royal College of Art. She currently runs her own project label, Sehikyo, committed to developing core ideas around clothing, through various practices. 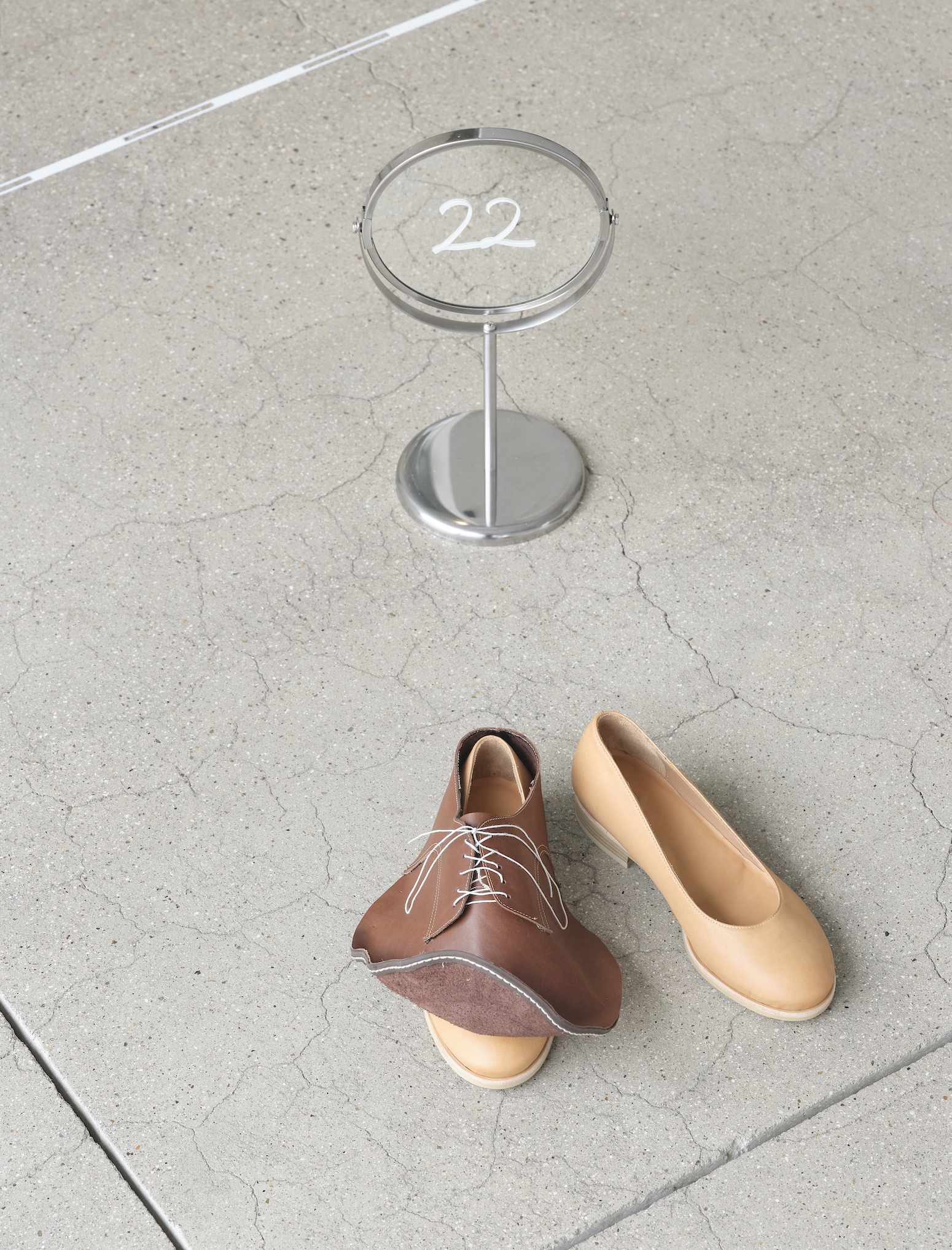